Ever yell at people on TV? Come on, don’t lie.

Does it ever do anything? I doubt it.

Ok, maybe you’re calmer than most and just want to ask them a question. How’d that work out? It’s not too often your message actually gets to them, yet alone gets a response.

Twitter makes it possible to reach out to those who were once unreachable. Professional athletes, actors, journalists and more can now be messaged 140 characters at a time.

But this isn’t an article on the pluses and minuses of Twitter; it’s about what happens after one of these celebrities retweets you.

Late last month I was watching Anderson Cooper 360 while checking Twitter just before bed when I noticed that Anderson Cooper was responding to tweets during commercial breaks. Cool!

I looked back through his @andersoncooper Twitter feed and realized he only responded to those he could with a simple one or two word answer. Hmmm, so what should I ask him?

Wait, that’s it! So I tweeted:

I watched a few more minutes until it went back to the crazy commercials. That was enough. I turned off the TV and went to bed. A few minutes later and I was nearly asleep. Then my phone buzzed. And buzzed. And buzzed. What the hell? Who’s calling me?

I picked it up and saw several Twitter notifications to @andersoncooper and myself. What just happened? Oh crap, Anderson Cooper just retweeted me to his 1.5 million followers!

In less than a minute I received over 20 replies in response to Anderson’s tweet. Over the next several hours I got 40 more! And don’t forget the 27 retweets.

In short, what happens after a celebrity retweets you? You don’t get much sleep.

Ever been retweeted by or exchanged tweets with a celebrity? Share your story in the comments!

12/22/11 Update: I changed to Embedded Tweets from static screenshots. Much cooler! 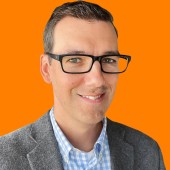 DJ Lein is a marketing professional for a large building materials company outside Washington, DC. He's a digital native that enjoys learning, photography and golf. Connect with DJ on Twitter and LinkedIn.